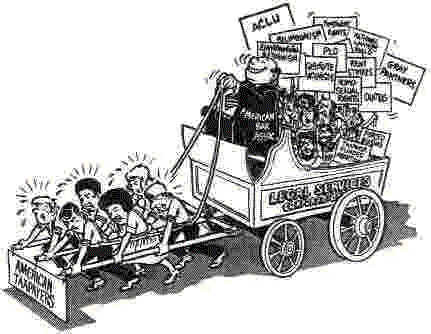 Hundreds of thousands of people have marched in opposition to restrictions on illegal immigration.

Who’s checking them out?

In fact, many of the march organizers represent organizations funded with our tax dollars, including Legal Services lawyers, the Mexican-American Legal Defense and Education Foundation, La Raza Unida, and many, many others.

Some of the groups involved in organizing the demonstrations are hard-core Marxist-Leninist entities.

As reported in The Washington Times (4/11/06), "One of the key organizers of the immigration protests and rallies nationwide including yesterday’s in Washington, is a group whose leaders are tied to the Workers World Party, a Marxist organization that has expressed support for dictators Kim Jong-il of North Korea and Saddam Hussein of Iraq.

"Act Now to Stop War and End Racism (ANSWER) Coalition, which also has proposed a nationwide boycott on May 1 to protest congressional efforts at immigration reform and border security, is an offshoot of the International Action Coalition, an anti-capitalism group founded by former Attorney General Ramsey Clark.

"In a press release celebrating a March 25 rally in Los Angeles against immigration-law enforcement that drew 500,000 people, ANSWER said it helped organize ‘a major contingent in the march’ and provided logistical support. The march was co-chaired by Juan Jose Gutierrez, director of Latino Movement USA, who also is a member of ANSWER’s Los Angeles steering committee. …

"Founded three days after the September 11, 2001, terrorist attacks on the United States, the organization describes itself as a ‘coalition of hundreds of organizations and prominent individuals and scores of organizing centers in cities and towns across the country’ that have campaigned against ‘U.S. intervention in Latin America, the Caribbean, the Middle East and Asia…and for civil rights and for social and economic justice for working and poor people inside the United States.’

"ANSWER also organized the first national anti-war rally after the September 11 attacks, a demonstration that brought 25,000 people to Washington and 15,000 to San Francisco on Sept. 29, 2001.

"The Workers World Party, a communist organization in the United States founded in 1959, describes itself as a party that has, since its founding, ‘supported the struggles of all oppressed peoples’ and opposes "all forms of racism and religious bigotry.’ In addition to sponsoring or directing numerous popular-front groups, it was instrumental in founding ANSWER through the International Action Coalition.

"Its March 25 rally in Los Angeles and its planned ‘Great American Boycott of 2006" on May 1 are part of a series of large-scale events [that the] coalition hopes will sway lawmakers to put millions of illegal aliens in the United States on track toward permanent residency and U.S. citizenship."

Excerpted from Howard Phillips Issues and Strategy Bulletin of February 28, 2003

"In the big-money world of federal appropriations, sometimes relatively small amounts are nothing to sneeze at. Indeed, the legal services community is thrilled that Congress approved in the omnibus appropriations bill $9.5 million more for the Legal Services Corp., a longtime target of conservative Republicans, than President Bush’s request of $329.3 million."

"Sen. Tom Harkin (D-Iowa) had sought $19 million more, to help 26 states that would be losing significant amounts of federal legal aid funding in fiscal 2003 because of shifts in state poverty populations. Federal law requires the LSC to distribute funds based on the most recent census data. Harkin had some GOP support in the Senate, particularly from Pete V. Domenici (N.M.) and Gordon Smith (Ore.)."

LOBBYING THROUGH THE LOOPHOLES

"While LSC lawyers are prohibited from lobbying, the National Legal Aid and Defender Association (NLADA) organized a grass-roots effort to lobby lawmakers. Lawyers in private practice, the American Bar Association and members of the National Organization of Legal Services Workers, the union representing workers in federally funded legal services programs, called lawmakers from the states that were hit hard by the new census numbers."

FRANK WOLF HAS NO PROBLEM WITH LSC

"LSC supporters were concerned that the Washington atmosphere of deficits and tax cuts would work to their disadvantage. And some LSC supporters worried that Rep. Frank R. Wolf (R-Va.), chairman of the House Appropriations subcommittee with jurisdiction over LSC funding, would hold fast to the president’s budget numbers.

" ‘We worked steadily since July…against some serious odds,’ said Julie Clark, NLADA’s senior vice president for government relations. Wolf said yesterday that there was no controversy over the LSC funding and that he was not subjected to any lobbying campaign. House and Senate appropriations conferees split the difference between Bush’s budget and Harkin’s $19 million addition.

" ‘This is a program that helps the poor. … We’ve always been for the program,’ Wolf said."

"Yet LSC supporters noted that the program has fought to survive over the years, and has had only level funding the past few years.

" ‘If you look at the history of the LSC, you realize the tremendous symbolic meaning of getting $10 million,’ said Eric D. Kleiman, communications director for the LSC." Source: Judy Sarasohn, "Special Interests", The Washington Post, 2/20/03, p. A37

"A leading House Republican is seeking to prevent the Legal Services Corp. from altering its regulations, including a change that would allow LSC grantees to accept clients who are not necessarily poor.

"Rep. F. James Sensenbrenner Jr. of Wisconsin said yesterday that the changes would violate the law and noted they were requested weeks before new Republican-nominated LSC board members would replace Clinton appointees.

"Mr. Sensenbrenner, chairman of the House Judiciary Committee, sent a letter to the federally funded LSC yesterday, protesting the proposed rules changes – which he said could be approved as early as this week – and urged the corporation to ‘wait until the new Board members are confirmed to consider the proposals.’ …"

"LAWYERS FOR THE POOR" HAVE CONSISTENTLY BROKEN THE LAW

"One of the most significant proposed changes would allow LSC grantees to accept clients that are not necessarily poor. The letter states the change ‘would permit representation of individuals who do not satisfy the financial eligibility criteria and would establish vague standards for the documentation of eligibility group clients.’

"Another change would allow LSC lawyers to accept fee-generating cases, which the letter said is clearly prohibited by the law governing the LSC. …"

"The letter said the ‘most alarming’ proposed change is to eliminate a congressional requirement that LSC lawyers obtain retainer agreements in their cases.

"A retainer agreement establishes the nature and scope of the attorney-client relationship, and prevents any misunderstanding of this relationship by establishing specific guidelines."

"Despite Mr. Sensenbrenner’s concern, [LSC President John N.] Erlenborn said in his statement, ‘LSC continues to enjoy the strong support of the administration and Congress. The LSC Board will continue to exercise its authority and oversight responsibilities in a manner fully consistent with the LSC Act.’ " Source: Amy Fagan, The Washington Times, 1/31/03, p. A9

Excerpted from Howard Phillips Issues and Strategy Bulletin of June 30, 2001

Jacqueline Trescott writes (Washington Post, 6/22/01, p. C1) that "Last year, under a Senate initiative, the NEA gained $7 million, its first increase in nine years. This year the White House had proposed $105 million for the agency in fiscal 2002, the same as the previous year.

"But yesterday NEA supporters in the House proposed adding $10 million to the Bush administration target. The amendment, offered by Rep. Louise Slaughter (D-N.Y.) during consideration of the Interior Department appropriations bill, also added $3 million to the National Endowment for the Humanities’ budget request of $120 million and $2 million to the Institute for Museum and Library Services’ request of $25 million.

"In the past, an amendment favoring NEA funding would trigger hours of raucous debate that swung from the evils of pornography to the value of introducing the arts to children. Yesterday afternoon the debate was more moderate and the $15 million increase for the three agencies was approved 221 to 193.

"Later in the day, Rep. Clifford Stearns (R-Fla.) introduced an amendment to take away the new NEA money. It was defeated 145 to 264. The Interior bill was passed by the House last night, 376 to 32, and it now heads to the Senate. …

"The change in the House’s attitude toward the arts was immediately applauded by the NEA’s supporters off the Hill. ‘It really symbolizes the elimination of a roadblock - the constant, negative votes. I think the old version of the cultural wars is over,’ said Robert Lynch, president of Americans for the Arts, a national advocacy group."  TAKE ACTION -- Abolish LSC

Excerpted from Howard Phillips Issues and Strategy Bulletin of October 31, 1999

The National Legal and Policy Center reports (10/22/99) that "The House-Senate Conference Committee voted for a Commerce-Justice-State appropriations bill which included $300 million for Legal Services Corporation for Fiscal Year 2000. The House passed the measure on Wednesday, October 20. ...

Excerpted from Howard Phillips Issues and Strategy Bulletin of August 15, 1997

As if to underscore the degree to which the Republican Party has become the enemy of parental rights and the pro-family cause generally, The Washington Post (8/6/97, p. A3) has reported the involvement of the Legal Services Corporation (LSC) back-up center, the National Center for Youth Law, in a court ruling overturning requiring parental consent for abortion.

In Fiscal Year 1995, the National Center for Youth Law received $681,916 of your tax dollars. Without the support of Newt Gingrich, Trent Lott, and the rest of the GOP hierarchy in Congress, the entire $300-million-per-year Legal Services Corporation would be out of business.

"Citing a teenager's right to privacy, the California Supreme Court today overturned the law here that requires minors to get parental consent or a judge's approval before having an abortion.

"The so-called parental consent law, which was passed by the California legislature in 1987, generally has not been enforced as it wound its way through the courts. But it has been a lightning rod in both the abortion battle and the debate over the role of the courts in countering legislative actions.

"A number of other states have laws requiring parental consent for abortions for minors and they have been upheld under the federal constitutional standards....

WHERE DOES YOUR CONGRESSMAN STAND ON FUNDING LSC?

"Abigail English, an attorney with the National Center for Youth Law, said that while parental consent laws sound ‘benign,’ they hurt teenagers from unhappy homes. ‘For many adolescents, revealing pregnancy would produce not counsel but catastrophe,’ she said."